Fibroids, also called “myomas” or “leiomyomas,” are benign growths which occur in the muscular wall of the uterus, or womb. They range from tiny microscopic growths to tumors as large as a melon. 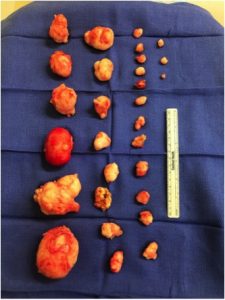 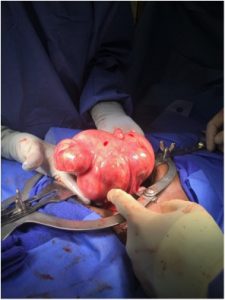 A Uterus Distorted with Multiple Fibroids

What are the Symptoms of Fibroids?

Fibroids may occur in up to half of all women, and many have no symptoms at all. Depending on the location and size of fibroids, they may cause symptoms including: (note: this should link to the section on the “fibroids” page on “symptoms”)

No one knows exactly why women develop fibroids, but several risk factors have been identified. Fibroids most commonly are diagnosed in women in their 30s and 40s; it’s uncommon for new fibroids to grow after menopause. Women of African-American descent are twice as likely to develop fibroids. Women who have a family history of fibroids (for example, a mother with fibroids) are about three times as likely to develop fibroids. In a few cases, specific gene mutations have been identified which predispose women to fibroids, but these gene tests are still investigational.

How are Fibroids Diagnosed?

Fibroids can often be felt by the examiner during a pelvic examination. If fibroids are suspected, a sonogram (ultrasound) is usually the next step. Occasionally, magnetic resonance imaging (MRI) is used to obtain more information about fibroids. Other tests like saline sonography (in which sterile water is instilled into the uterus during sonography) can help to determine the precise location of fibroids.

How are Fibroids Treated?

Fibroids without symptoms may require no treatment at all; many doctors recommend monitoring fibroids periodically by ultrasound to determine if they are growing. When fibroids cause symptoms, they can be treated medically, or with a variety of procedures. Medical therapy might include birth control pills, or a progesterone-containing intrauterine device (IUD), which often reduces heavy bleeding. Surgical therapy may be used just to relieve symptoms (for example, endometrial ablation, which treats heavy menstrual bleeding) or to remove the fibroids. In women who have completed their families, one surgical option is hysterectomy (removal of the womb).

How are Fibroids Removed?

Fibroids have traditionally been removed surgically using an “open” procedure, typically with a bikini-type incision. Nowadays, an experienced minimally invasive gynecologic surgeon may offer you the alternative of removing fibroids with small incisions…or no incisions at all! This may be accomplished using a thin telescope inserted through your navel (laparoscopic myomectomy), or a thin telescope inserted into the uterus through the vagina (hysteroscopic myomectomy).

Can My Fibroids be Removed Laparoscopically?

A number of factors determine whether fibroids can be removed laparoscopically. Probably the most important consideration is the size of the dominant fibroid: Fibroids larger than 6-8 cm usually cannot be removed laparoscopically. Also important is the number of fibroids which need to be removed: Women with numerous fibroids may be better served by an open procedure. Women who have scar tissue as a result of numerous prior surgeries, and also women who are very overweight may not be candidates for a laparoscopic procedure.

Are Fibroids Cancerous? Can They Become Cancerous?

By definition, fibroids are benign (not cancerous). Rarely, a mass thought to be a fibroid is discovered to be cancerous once removed. This is very uncommon, and is estimated to occur in less than 1/350 cases. These cancers of the uterus seem to arise independently of fibroids.

Will Fibroids Interfere with Pregnancy?

Whether fibroids will interfere with pregnancy depends chiefly on their location and size. Submucosal fibroids are those located inside the hollow cavity of the womb; these fibroids can definitely prevent pregnancy. They also can make miscarriage more likely if pregnancy does occur. Fibroids buried within the muscular wall of the womb (intramural fibroids) generally cause complications in pregnancy if fairly large. Evidence suggests that fibroids more than 5 cm (about two inches) in diameter are associated with numerous complications in pregnancy, including premature delivery, poor growth of the fetus, need for cesarean section, and need for transfusion.

Natural elevations of hormones in pregnancy may make fibroids grow. In some cases, fibroids grow so fast that they outgrow their blood supply. When this happens, some of the fibroid tissue starts to die. This is called degeneration, and is usually quite painful. 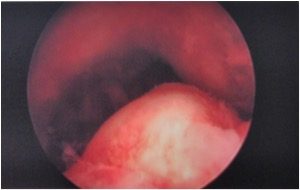 A Submucosal Fibroid Seen at Hysteroscopy

I’m Thinking About Having My Fibroids Removed. Will They Grow Back?

Once a fibroid is completely removed, the same fibroid cannot grow back. However, women who have a tendency to grow fibroids can always grow new ones. One of the chief predictors of whether fibroids will regrow is the number of fibroids removed at surgery: Women who have a single fibroid removed have a relatively small chance of requiring additional surgery for fibroids; when multiple fibroids are removed, however, the risk of growing new fibroids which require surgical treatment is higher.