Are you looking for frequently asked questions about menopause?
Please visit our Menopause FAQ page.

From puberty onwards, women get a monthly reminder of their womanhood, their monthly period. At menopause, their period stops. This is completely normal and natural, but is associated with some unwelcome symptoms, and also some significant physiologic changes.

When do women normally go through menopause?

While the average age at menopause is 51, there is a great deal of variation. Dr. Saad has seen a few women in his practice who were 60 years old and still menstruating. They are, by the way, exasperated. Conversely, menopause before the age of 45 is considered “early”, but still normal. Menopause before the age of 40 is unusual, considered premature, and generally triggers a search for an underlying cause. The age at which a woman goes through menopause is not related to the age at which her period started, but is predicted by her family history. Women tend to stop getting their period around the same age as their mothers and sisters.

While the average age at menopause is 51, there is a great deal of variation.

What are the symptoms of menopause?

The ovaries start producing estrogen when you are a girl; this is what makes your breasts develop, gives you your curvy shape, and starts your monthly period. When women reach their 40s, estrogen production by the ovaries begins to decline, and eventually falls to a level at which the monthly period stops.

What are the physiologic changes in menopause?

In addition to symptoms of menopause which women feel, there are silent changes in virtually every bodily system which accompany the hormonal changes of menopause. Two areas with important consequences for your health are the cardiovascular system and the bones.

Changes in the Cardiovascular System

It is well-known that the risk of heart disease increases with age. As the accompanying graph shows, menopause confers additional risk of cardiovascular disease: In each age group, the risk of cardiovascular disease is significantly higher among women who are already menopausal. In fact, a woman who is menopausal at the age of 42 has about the same risk of heart disease as a pre-menopausal woman at age 52. 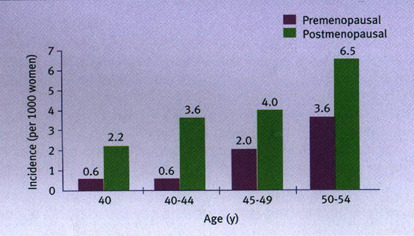 There are a number of mechanisms that are responsible for the increased cardiovascular risk after the menopause. Most of the effect, though, seems to be directly related to the effects of estrogen on lipids, or fatty substances in the blood. Menopause is associated with a significant increase in LDL levels (the “bad” cholesterol), together with a substantial decrease in HDL levels (the good cholesterol). There are other mechanisms by which menopause affects cardiovascular risk, but most of the difference in risk between pre- and post-menopausal women can be explained by effects of menopause on lipid levels.

Changes in the Bones

In addition, menopause has dramatic effects on bone health. Women reach their peak bone mass early in life. Bone mass starts to decline as women reach their 40s, more rapidly in perimenopause, and basically falls off a cliff after menopause. Some bone loss is normal and natural part of aging. But if women start with not-so-great bones, or if they lose bone at an accelerated rate, they may actually get osteopenia or osteoporosis—bones that are abnormally weak, and particularly susceptible to fractures. 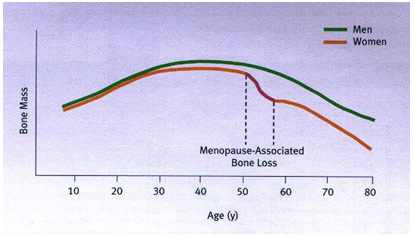 Again, women are much more afraid of breast cancer than of osteoporosis, but the risk of osteoporosis is much greater. If you’re 50 years old, there’s about a 50/50 chance that you’ll have a spine, wrist, or hip fracture in your remaining lifetime. The chance of a hip fracture after the age of 50 is 1 in 6, or 16%. Among those women who break their hip, half will never live independently again. In fact, 20% will not even survive a year after their fracture. Osteoporosis is something that we take very, very seriously.

How is menopause diagnosed?

Women frequently ask if we can do a “blood test” to check for menopause. For women who are going through a typical menopausal transition at a typical age, blood testing is not particularly useful: Women around 50 with their periods fizzling out and complaints of hot flashes are clearly going through menopause, and we don’t require a blood test to make that diagnosis. At the extremes of age, or if there’s something unusual about the process, we can check a blood FSH level to get an idea about the level of ovarian function.

Menopause does not happen overnight. There’s no switch that turns off the estrogen.

Menopause does not happen overnight. There’s no switch that turns off the estrogen. Physiologically, a “dimmer” switch results in slowly declining estrogen levels over several years. As estrogen levels fall, women are said to be in “peri-menopause”. Typically, this is when menopausal symptoms begin: Women start to notice hot flashes and night sweats; menstrual irregularities; disturbed sleep, mood changes, vaginal dryness and painful intercourse. Typically, perimenopause lasts for about 3 to 5 years, with symptoms becoming more frequent and intense as the process unfolds.

If you’re not sure if you are getting hot flashes, then you probably aren’t, because it’s a pretty unmistakable sensation: Women describe hot flashes as a wave of heat rising through the chest, head and neck, and associated with blushing, sweating, and a rapid heart rate. At night, we call these “night sweats”. A hot flash typically lasts for a few minutes, and at their worst they can happen 20 or 30 times a day. Obviously, this is an unpleasant sensation, and for many women it can be socially embarrassing.

Women who suffer with hot flashes frequently ask: “How long is this going to last?” Here’s the answer: The figure below shows how many years hot flashes lasted in 501 women after they reached menopause (i.e., the timeline begins when their period had already stopped): 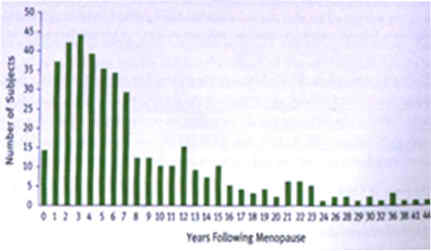 As you can see from the timeline above, most women—about 75%—will be finished with hot flashes within 4 years of menopause. But for a few women, hot flashes can last for a very, very long time: The last entry on the timeline above indicates one woman still having hot flashes 44 years after her periods stopped! This would make her 95 years old. At least at this age she has almost certainly outlived her husband, so she can finally sleep with her windows open!

Hot flashes are closely related to the sleep disturbances that women report during menopause. Usually, women going through menopause fall asleep easily, but are awakened in the early morning hours by night sweats. Frequently, they find themselves up at 3 am, unable to fall back asleep. As if that were not bad enough, lack of estrogen seems to have a direct adverse effect on sleep quality: Women with low estrogen levels spend less time in REM sleep. This is the “restorative” portion of sleep that makes us feel good the next day. So women not only get less sleep after menopause, they get poorer quality sleep.

It’s hard to overemphasize how important sleep is to our general well-being. In fact, some researchers think that many so-called “menopausal symptoms” are really just the result of sleep deprivation. The so-called “domino hypothesis” suggests that many of the popularly accepted “menopausal symptoms” such as irritability, fatigue, and forgetfulness really just result from lack of sleep.

In addition to hot flashes, one major complaint of women in peri-menopause has to do with menstrual irregularity. About 70% of women will go through peri-menopause according to the textbook: Usually, the first menstrual sign than menopause is approaching is your periods coming closer together, with a normally 28-day cycle becoming a 24- or 25-day cycle. You may skip an occasional period, and over time start skipping more often. Pretty soon your period becomes infrequent, and then fizzles out altogether. Only about 10% of women report that their period just abruptly stops.

For about 20% of women, periods may be extremely heavy during perimenopause. Women may have to use two pads at a time; they have to change often, and they sometimes soak through their clothes, creating embarrassing situations. They may become anemic, which further contributes to their fatigue. Heavy periods are a common problem in perimenopause, and a variety of attractive treatment options are available.

Vaginal dryness is common after menopause—especially in later years. Skin in the vagina and urethra contains estrogen receptors, and it is the availability of estrogen in the circulating blood which keeps these tissues supple and healthy. When estrogen is withdrawn, the tissues become fragile and sensitive causing vaginal atrophy, which may cause a variety of symptoms, including:

Although these symptoms are easily treated, many women never discuss these sensitive topics with anyone, including their doctors. As a result, sexuality often suffers after menopause. If you suffer from vaginal dryness or painful intercourse after menopause, you should definitely bring it to our attention. A variety of safe and extremely effective treatment options are available.

While menopause is a natural and normal transition, it can be associated with some unpleasant symptoms and adverse changes to your physiology. Every woman’s experience of menopause is different: Some women can easily “sweat it out,” while others will need additional support.

Fortunately, there are a variety of solutions available for menopausal symptoms. At The Woman’s Health Pavilion, we would welcome the opportunity to discuss your symptoms and your health in menopause. We can offer guidance, support, and solutions to keep you at your best as you make the transition.