Polyps are fleshy growths of tissue which may occur on the inner lining of organs such as the sinuses and colon. In women, polyps commonly occur in the uterus and cervix. The team of gynecology specialists in Queens and on Long Island at The Woman’s Health Pavilion is experienced in diagnosing a range of conditions both common and rare, including polyps.

To meet with a gynecologist or other experienced practitioner at one of our multiple offices in Queens or Long Island, simply request an appointment using our online form.

The two most common types of polyps we see as gynecologists are located in the uterus and cervix.

Uterine polyps may be completely asymptomatic, or can cause symptoms like heavy periods or bleeding between periods.

Cervical polyps arise from the inner lining of the cervix, the entrance to the uterus located at the top of the vagina. They may cause no symptoms at all or they may cause spotting between periods, especially with intercourse.

It is not known why some women develop polyps while others do not. They do seem to be related to certain conditions: 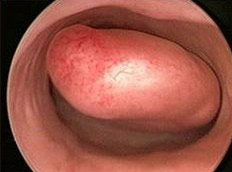 How are polyps diagnosed?

Diagnosis of polyps depends on their location, size, and number. As with fibroids, many women don’t know they have polyps.

While most polyps are benign, a small proportion of polyps are malignant (cancerous). Generally, polyps are more likely to be dangerous if they:

Removal of polyps not only resolves the symptoms they cause, but also allows us to confirm that the polyps are benign.

Do polyps need to be removed?

While symptoms of polyps (e.g., heavy or irregular bleeding) can be treated with a variety of approaches, we usually remove any polyps that are causing symptoms. Removal not only resolves the symptoms, but also allows us to confirm that the polyps are benign.

For women planning a pregnancy, there is some evidence that endometrial polyps may be associated with a higher risk of infertility and miscarriage.

How is hysteroscopy performed?

During this procedure, a thin, lighted telescope is inserted into the uterus to look at its interior. Hysteroscopically, endometrial polyps appear as a “tongue” of tissue occupying the inside of the uterus. Once identified, polyps are easily removed by grasping, scraping, or using specialized instruments to resect them.

Usually, dilation and curettage (D&C) is performed at the time of hysteroscopy. During this procedure, the cervix is dilated to allow an instrument into the uterus and a curette is used to evacuate the lining by gentle scraping.

A hysteroscopy with D&C requires just a few minutes under light anesthesia. Aside from some mild cramping and light staining, women generally feel OK after the procedure and can return to their usual activities the following day.

Are there risks associated with polyps?

Polyps are usually just a nuisance, but can occasionally be serious. All tissue removed in our office or at the time of a D&C is sent to a pathologist for microscopic review. We have detected several uterine cancers arising within polyps. Since early detection translates into a better chance of cure, we encourage any woman who thinks or knows she has a polyp to make an appointment with us for a thorough evaluation.