“Going to the gynecologist is rarely easy for women. If I can put a nervous patient at ease with some reassurance and a little humor, my day is complete.” 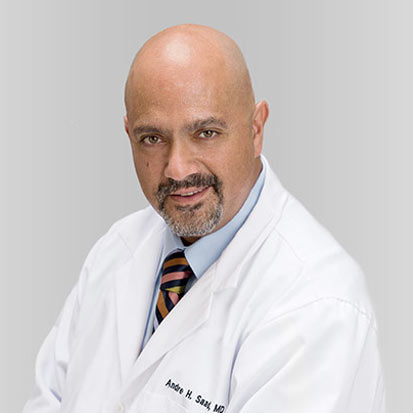 Dr. Andre Saad earned his undergraduate degree at Johns Hopkins University, attended medical school at NYU School of Medicine, and completed his residency in obstetrics and gynecology at Columbia Presbyterian Medical Center. Since joining the practice in 1994, Dr. Saad has dedicated himself to gynecology and gynecologic surgery for our Queens and Long Island patients. He currently serves as Chief Executive Officer of the Woman’s Health Pavilion.

Dr. Saad has served in numerous leadership roles outside of the practice, including Chair of the Department of Gynecology and President of the Medical Staff at Syosset Hospital. He currently serves as Director of the Surgical Pavilion and Director of Minimally invasive Gynecology at Plainview Hospital. Under his leadership, both Syosset Hospital and Plainview Hospital have been designated Centers of Excellence in Minimally Invasive Gynecology.

Dr. Saad is nationally recognized as a Master Surgeon in Minimally Invasive Gynecology.

To meet with Dr. Saad, board-certified obstetrician-gynecologist, at our office in Westbury or Howard Beach, NY, request an appointment. The Woman’s Health Pavilion serves patients 7 days a week and offers same-day appointments for urgent conditions.

“Going to the gynecologist is rarely easy for women. If I can put a nervous patient at ease with some reassurance and a little humor, my day is complete.”

Andre Saad, MD is a highly respected leader in the field of obstetrics and gynecology. Highlights of his career include:

Dr. Saad has been nationally recognized for excellence in minimally invasive gynecologic surgery by the American Association of Gynecologic Laparoscopists and the Council of Gynecologic Endoscopy.

An Interview With Dr. Saad

What led you to the field of obstetrics/gynecology?

I decided at a young age that I wanted to be an OB-GYN, just like my father. He was a talented physician and was universally loved by his patients, but most of all he was passionate about his work. His passion definitely inspired me.

How many years have you been practicing in the field?

After growing up on Long Island, I spent 12 years in training at Johns Hopkins, NYU, and Columbia-Presbyterian before returning to join my father in practice in 1994.

“I’ve been in practice for over 20 years and am still excited to go to work every day.”

What makes your job rewarding?

My work inspires me mainly because patients are so grateful for the simplest acts of kindness. Every day, I have dozens of opportunities to make a small difference with a gentle exam, a kind word, or a little humor to put a nervous patient at ease. Sometimes, I get to be the hero who solves a problem that’s been going on for years. Like most physicians, I thrive on the appreciation of my patients.

Do you have special interests or areas of specialty as an OB-GYN?

Over the last decade, I’ve limited my practice to gynecology and gynecologic surgery. I’ve earned recognition as a Center of Excellence for Minimally Invasive Gynecology for my own practice and for two hospitals’ gynecology departments. I’m proud to be considered an “expert,” but I still refine my technique with every case.

What do you enjoy doing in your free time?

Outside of work, my life revolves around my family. My wife and I are blessed with four kids, and we’re involved in all of their activities, from piano to ice hockey. I try to instill in them the same attitude about work that my father instilled in me: If you love what you do, it never feels like work.