At The Woman’s Health Pavilion, we support a woman’s right to plan her family as she sees fit. This includes having access to a full range of birth control options at our OB/GYN offices in Queens and Long Island. Fortunately, many forms of safe and reliable contraception are available today as detailed below.

The Woman’s Health Pavilion offers a range of contraceptive solutions. To find the right one for you, request an appointment with a gynecologist or support staff at any of our Long Island locations. We see patients 7 days a week and offer same-day appointments for urgent conditions.

Choosing the right birth control can be overwhelming. Our gynecology providers will walk you through your options and take the uncertainty out of this decision. To learn more about the following birth control methods, click on the link:

Birth Control Pills or “the Pill”

Birth control pills are a popular choice among women seeking contraception. While the Pill does not prevent sexually transmitted infections, it is available in a range of formulations that can provide a variety of benefits. In addition to offering safe and reliable contraception, the Pill can also lighten and regulate your period, improve cramps, improve PMS/PMDD symptoms and reduce your risk of ovarian and uterine cancer. Visit our Birth Control Pills page to learn more.

The patch and the ring are especially useful for women who are not reliable daily pill-takers or prefer not to take one. The patch is applied directly on the skin and changed weekly, while the ring is inserted vaginally and changed monthly. Both allow for one week off for your period to come.

They work by releasing hormones into the bloodstream, which are virtually identical to those found in birth control pills. As such, the risks and benefits are largely similar. However, women using the patch have 60% more estrogen released into their blood than they would if taking a typical birth control pill; there is some evidence that the risk of blood clots is thus higher in patch-users than in those taking the pill. Also, the contraceptive efficacy of the patch seems to be impaired in women who weigh more than 198 pounds and therefore cannot rely on it to prevent pregnancy.

Similar to some birth control pills, the patch and the ring are not safe in women over 35 who smoke, in women with certain cardiovascular risk factors (e.g., uncontrolled diabetes or high blood pressure), and in women who have certain blood clotting disorders. If you are considering the ring or the patch, we welcome the opportunity to review your options.

Depo-Provera is an injectable form of progesterone-only contraception that is given approximately every three months. It is highly reliable; the risk of pregnancy is less than 1% if the injection is given on time. This makes Depo-Provera a reasonable choice for women who prefer a more discrete method, cannot use estrogen-containing birth control, and cannot rely on properly using a pill, ring, or patch.

In our practice, women are generally given a prescription for Depo-Provera. Once they have the injection, they return for administration. The first dose is usually given during a period to ascertain there is no pregnancy. The following doses are given every 12 weeks. If women miss their scheduled dose, then alternate precautions need to be taken to prevent pregnancy. The missed dose can be given after a negative pregnancy test.

Because Depo-Provera suppresses estrogen levels, prolonged use can adversely affect bone mineral density, which is directly related to bone strength. Depo-Provera users have lower bone mineral density than those on other contraception methods. Some studies suggest that stopping the injection results in the recovery of some lost bone mass. It is unclear whether these findings increase the risk of fracture later in life. Because of this, the FDA has a “black-box warning” and the packaging label for Depo-Provera indicates that it should not be used for more than two years unless other contraceptive options are inadequate.

Importantly, women on Depo-Provera typically require several months after their last injection to return to full fertility: While the injection can be relied upon for 3 months of protection, women may find that it takes much longer for their monthly period to be re-established, and even longer to become pregnant. This makes Depo-Provera a poor choice for women who are planning to conceive quickly after discontinuing contraception.

Side effects may be common in Depo-Provera users. In the first few months of use, most women will have disorganized periods, which can range from random spotting to prolonged bleeding. Nonetheless, after several months of use, periods become light to non-existent: In clinical studies, 55% of women reported no periods after one year of use. Weight gain is also seen: In one study, the average woman using Depo-Provera gained 5.4 pounds after the first year of use. Hair loss has been reported in up to 10% of women.

Despite all of this, Depo-Provera can be a good choice for the right patient. If you are interested in learning more about this and other birth control methods, come see us at one of our offices. 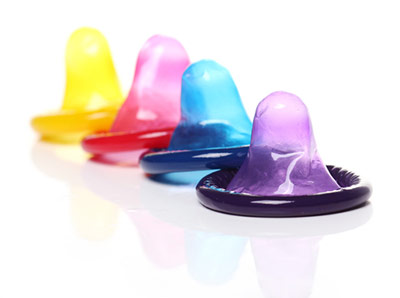 Condoms have been used for centuries to prevent pregnancy. Currently, there are dozens of varieties available including latex, polyurethane, lambskin, with or without lubrication, special textures, and other features. With perfect use (i.e., use with every sexual encounter, throughout the entire time) pregnancy rates as low as 2% per year are achievable. Nonetheless, with “typical” use some 15% of couples using condoms will conceive a pregnancy with each year of use.

Some varieties of condoms are coated with nonoxynol-9, a powerful spermicide which provides an added level of protection against pregnancy. However, recent studies suggest that this component facilitates the acquisition of HIV causing several manufacturers to withdraw their nonoxynol-9 coated condoms from the market. Regardless, condoms are the only form of contraception that provide protection against most sexually transmitted infections, including HIV.

If you rely on condoms for contraception or to protect against STIs, keep these facts in mind:

Some women (and men) may find condoms irritating due to latex allergies or sensitivity to added lubricants and textures. Non-latex condoms made of polyurethane or lambskin are a good alternative but note that the latter offers less protection against STIs than other types of condoms. Switching to a different brand can sometimes help. Please know that there are always options.

A diaphragm is a dome-shaped piece of latex or silicone that is inserted into the vagina before intercourse. Used with spermicide, it forms a protective seal around the cervix and prevents entry of sperm into the uterus. Diaphragms are supposed to be placed with spermicide in the vagina before intercourse, and remain there for at least 6 hours after intercourse. With perfect use, failure rates of around 6% are expected. With typical use, however, failure rates are usually 15-20%. This means that 15 or 20 out of every 100 women relying on a diaphragm for contraception will get pregnant each year.

Like condoms, diaphragms can cause irritation. Sometimes this is due to sensitivity to latex in the diaphragm, but improper fitting can also be a cause of irritation. (Diaphragms are available by prescription only; to obtain an intrauterine device (IUD), women need to be “fitted” with a proper size, usually by a gynecologist.) Diaphragm use is also associated with an increased risk of UTI. Unlike condoms, diaphragms do not protect against STDs.

Because of their relatively high failure rate—and also because they are a bit of a nuisance to use—diaphragms are no longer the popular choice they once were: Before the introduction of the Pill in 1960, diaphragms were used by one-third of married couples in the U.S. In the last five decades, diaphragms have largely fallen out of favor, chiefly as a result of superior methods becoming available.

An intrauterine device (IUD) is a small T-shaped piece of plastic that is inserted through the cervix into the uterus by a medical professional. Once the IUD is in place, it provides effective contraception for 3 to 10 years, depending on which type of device is used. Once it expires—or anytime earlier if a woman wishes—the IUD can be removed, also by a medical professional. Fertility is expected to return immediately after it is removed. Visit our IUD (Intrauterine Device) page to learn more.

For women who are certain that they have completed their families, sterilization may be an attractive option. Tubal sterilization is a procedure in which the fallopian tubes are permanently sealed or removed completely in order to prevent pregnancy. Once the fallopian tubes are sealed or removed, the sperm and egg cannot meet, and pregnancy does not occur. Tubal sterilization was first reported in 1880 and now used worldwide by more couples than any other method of contraception. Visit our Permanent Birth Control page to learn more.

In an idealized 28-day cycle, in which your period starts on day 1 and the next period begins on day 29, women are expected to ovulate around day 14. If your cycle is longer, your expected date of ovulation will be later (e.g., in a 35-day cycle, ovulation is expected around day 21). Allowing for some variation in cycle length from month to month, some variation in the exact day of ovulation, and the fact that sperm and egg can live in the genital tract for a day or two, you can make a calendar like this: 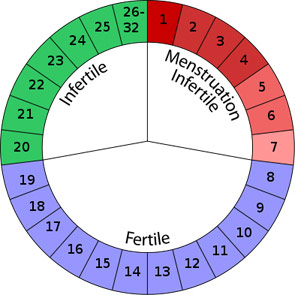 So, for women with a 26- to 32-day menstrual cycle, days 8 through 19 represent “fertile” days. Pregnancy is considered unlikely if intercourse occurs on other days. Thus, women can prevent pregnancy by avoiding intercourse on fertile days (or using other forms of protection like condoms during that time).

This is a simplified example of calendar-based natural family planning. Much more complex calendar-based systems have been devised. There are also “symptoms-based” natural family planning methods which rely on symptoms of ovulation: Because ovulation is associated with changes in cervical mucus and slight changes in body temperature, women can be taught to identify signs of ovulation and to avoid pregnancy when symptoms suggest ovulation is occurring.

Unfortunately, natural family planning methods have a relatively high rate of failure. They also require a significant commitment by women to track their cycles and/or symptoms daily.

Therefore, if you definitely don’t want to be pregnant, then this method may not be right for you. If you would like more information on this and other contraceptive options, we’re happy to provide you with resources to improve your chances of success.

Emergency contraception can be useful if you have had unprotected intercourse; if you “messed up” with your pills, your patch, or your ring; if you missed a dose of your injection; or if your partner’s condom broke or came off. It is also useful for women who have been forced to have intercourse against their will.

Emergency contraception is not the same as the “abortion pill”: While there are medications which will interrupt an early pregnancy, the “morning-after pill” works by preventing conception.

Because the emergency pill works by delaying ovulation, a woman can become pregnant later in the cycle if unprotected intercourse occurs again. Therefore, condoms are advised at least until the next menstrual cycle. Starting continued contraception is also recommended.

Some common side effects of emergency contraception include nausea and vomiting, breast tenderness, headaches, and dizziness. Women may also have disorganized bleeding for the remainder of their cycle.