Fibroids are common benign tumors of the uterus, ranging from tiny asymptomatic growths to massive, bulky tumors associated with pelvic pain and heavy periods with flooding and clots. While several treatment approaches may be offered to women with symptomatic fibroids, successful treatment often requires the source of the problem—the fibroids—to be removed. Surgical removal of fibroids is called myomectomy. Myomectomy is typically offered to women who have significant symptoms related to fibroids, but who are not ready for hysterectomy because they still want to be able to have children in the future.

Fibroids can be removed by several different surgical approaches. For decades, most myomectomies have been performed by laparotomy, a major surgical procedure performed through a large abdominal incision. An “open” myomectomy typically requires 2-3 hours under anesthesia, and 2-3 nights in the hospital; after discharge, women may not be able to return to work for 4-6 weeks. While this approach may be appropriate for selected women, most women who require myomectomy can be offered a minimally invasive alternative, one that gets them back on their feet quicker, and with smaller, less noticeable scars. At The Woman’s Health Pavilion, we specialize in minimally-invasive alternatives to major surgery. 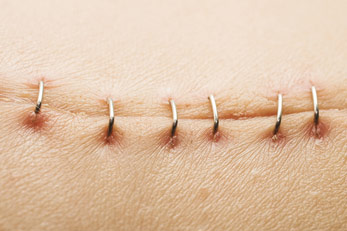 Submucosal fibroids—those located inside the hollow of the uterus—can be removed hysteroscopically. During a hysteroscopic myoma resection, we insert a telescope into the uterus through the vagina. We then pass a slender element through the telescope sheath which allows us to resect or vaporize the fibroid. The entire procedure is performed under anesthesia in an operating room, and usually takes about an hour. Women are discharged home shortly after the procedure and can generally return to work the next day. Since there is no incision and no stitches, women generally have only minor discomfort after hysteroscopic myomectomy.

Most women who require myomectomy can be offered a minimally invasive alternative, one that gets them back on their feet quicker, and with smaller, less noticeable scars.

When fibroids are located within the muscular wall of the uterus (intramural fibroids) or on the outer surface of the uterus (subserosal fibroids), they can often be removed laparoscopically. In laparoscopic myomectomy, we insert a long thin telescope through the navel to see inside the abdominal cavity. Then, slender instruments are passed through tiny incisions to remove fibroids from the uterus. Finally, the fibroids are removed in pieces through the tiny incisions. Typically, the procedure requires about 2 hours under anesthesia; most women are able to go home the same day, and can return to work in 7-10 days.

Because laparoscopic myomectomy is performed using tiny incision, it is associated with less postoperative pain and a much more rapid recovery than “open” myomectomy; it also leaves patients with much less noticeable scars. In addition, laparoscopic myomectomy is often associated with less blood loss, a reduced risk of infection, and fewer adhesions (internal scar tissue) than traditional approaches.

Laparoscopic myomectomy is a technically demanding procedure: Generally, the procedure requires special expertise in laparoscopic surgery. At The Woman’s Health Pavilion, we perform the vast majority of myomectomies using a minimally invasive approach. If you have been told that you are not a candidate for a minimally-invasive myomectomy, we invite you to see us in consultation.